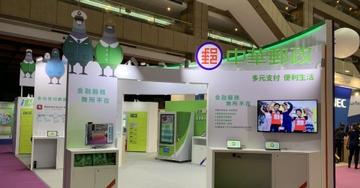 Chunghwa Post bank account holders would be able to withdraw funds from automated teller machines (ATMs) using QR codes at selected post offices next year, the postal company said yesterday, adding that in 2021 it plans to begin testing the possibility of allowing people to withdraw funds using facial recognition.
The company plans to make its ATM cards more useful, so that people can use them to pay for groceries, metro fares, taxes and other fees, Chunghwa Post chairman Wu Hong-mo said.
Chen Chia-li, director of the company’s savings and remittance department, said that the company would choose certain post offices to begin testing the use of QR codes for withdrawals next year.
To access the service, customers would have to download the company’s e-Post Office mobile phone application, in which they could view the QR codes for their accounts, she said.
Chunghwa Post’s ATMs would scan the QR codes, allowing people to withdraw money from their post office accounts, Chen said, adding that it would make things easier for people who forget their ATM cards.
The company plans to have this function available at 680 of its ATMs nationwide by 2021, and would gradually increase the number, she said.
Chunghwa Post would start testing the possibility of allowing people to withdraw funds after the facial recognition system verifies their identities in 2021, Chen said, adding that it is scheduled to introduce the service in 2022.
Chunghwa Post Visa Debit ATM card holders would soon be able to access the MRT Taoyuan Airport Line and the Kaohsiung MRT system with the card, Chen said.
The service should become available some time before the end of the first quarter next year, she added.
The company has about 3.6 million Visa Debit ATM card holders, Chen said.
Asked if Chunghwa Post is interested in forming similar partnership with EasyCard Corp, she said that EasyCard is in the process of securing its electronic payment license, which would allow EasyCard holders to transfer money to other accounts.
“We would wait until the corporation obtains the license before talking about a possible partnership,” Chen said.
Chunghwa Post is also interested in linking accounts to other electronic payment service providers, Chen said.
It has partnerships with JKO Pay, Line Pay, iPass, PChome Pay, Gama Pay and O’Pay, Chen said.
Starting tomorrow, people can also pay for items delivered to them through the postal company’s iBOX service using the Taiwan Pay or e-Post Office applications, Chen said.
From March, people collecting packages can pay using Chunghwa Post’s ATM cards if the item costs less than NT$3,000, she said.
Source: Taipei Times
Nina Lin (ninalin@taitra.org.tw)