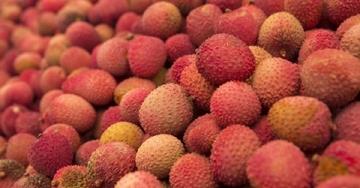 A delegation led by Taiwan's Council of Agriculture (COA) Deputy Minister Chen Junne-jih recently held a lychee planting trial run in Queensland, Australia, introducing the summer fruit to Australian officials.
To raise the profile of Taiwanese lychees and extend their supply period, the government has agreed to export them Down Under. The council said that Taiwan signed a memorandum of understanding (MOU) with the Australian Department of Agriculture in 2017, promising to work together towards off-season lychee production in Queensland, reported Liberty Times.
After three years of hard work, six varieties of lychees developed and cultivated by Taiwanese farmers were brought to the planting trial. Chen said that considering its unique appearance and storability, the lychee holds distinctive advantages over other fruits from a marketing perspective, reported UDN.
The agricultural partnership will allow year-round production of the coveted fruit. The normal harvest period for Taiwanese lychee is from May through August, but since Australia is located in the southern hemisphere, it will instead see production from November to February.
Source: Taiwan News
Kai Chiu (kai@taitra.org.tw)